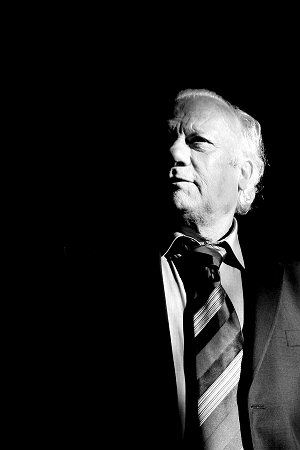 What brought you to the LADY BLOOD project ?

The director, Jean-Marc Vincent, and Eric Porcher, the producer.

Did you accept the part after reading the script or out of friendship for those involved ?

After acting in HIGH TENSION and CALVAIRE, I thought it would be fun to do another horror movie. What's more, I know the special effects artist well. David Scherer is an amazingly talented guy! And we're all like a bunch of good friends.

As you just said, you're regularly to be found in genre movies. There was HIGH TENSION and CALVAIRE, but also I STAND ALONE, CARNE, and others. Were those your own choices?

Genre movies have been a sort of catalyst for me. I STAND ALONE and of course CARNE helped me get my foot in the door. I can safely say that I'm still in movies thanks to Gaspard Noé. Before that, I did a couple of things here and there, I started with LE DOULOS and ten years later, LES CAMISARDS. Five years after that, I don't even remember... But the parts I got with Kassovitz (THE CRIMSON RIVERS), Nicloux (A PRIVATE AFFAIR, LE POULPE) and the rest, that's clearly thanks to Gaspard.

You often act in movies by young, first-time directors. Is that also a personal choice?

Yes, I don't like the "granddaddy", except for Alain Corneau's, of course. Still, Alain Corneau had seen and liked Gaspard's movies. That doesn't mean the others don't like Gaspard's movies but they don't think about me for parts in their own (like the police commissioner in Corneau's remake of LE DEUXIEME SOUFFLE). I just did a movie with another young director, Romuald Beugnon, who discovered me in CARNE and I STAND ALONE. His movie's called VOUS ETES DE LA POLICE and will be released in december. And for once, I have a comic part. I would like more of those! Obviously, I still want to play the tough guy, the bastard... Because it's so different of who I am. It's not hard to do, just different, it's a whole other character.

Actors are generally reknown for more serious parts, not for the comic ones...

I'va been rewarded in both genres. I got the award for Best Actor at the Namur Festival for I STAND ALONE and an award for my part in VOUS ETES DE LA POLICE at the St-Jean-de-Luz Festival.

Let's get back to LADY BLOOD. What part do you play?

In LADY BLOOD, I'm a cop, I'm the commissioner who oversees information and sends his men out in the field. I have no gory scenes at all, I'm not a bastard, I'm just an ordinary cop.

So you play Yanka's superior officer, the part played by Emmanuelle Escourrou ?

Yes. I'm the commissioner and she's the chief of police.

I heard that you only have two days of shooting in all ?

No, I think it'll be over in one day. I already stopped by at the set for a birthday party. I'm a friend of the family so I'm around. But for the shooting itself, I'm only here today.

What did you think of the script ?

I thought it was very well written. Everything holds up and I also learned about the original movie, BABY BLOOD, a cult movie which I didn't know about but I'll get around to seeing it. I don't know how or when but I will. Then, who knows, maybe I'll come back for "Grandaddy Blood"!