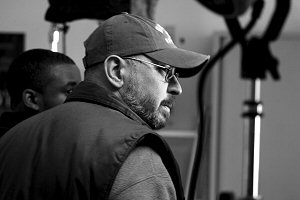 It's been a while, that's for sure. Back then, I was very impressed with it. I had been a writer for a little while with the magazine Starfix and my friend Christophe Lemaire, an expert on all things horror, had written several articles on BABY BLOOD that I had read. It was definitely a first in France. Back then, gore movies were exclusively American, such as STREET TRASH, EVIL DEAD 2... We were discovering all that but it seemed too trashy to interest a french audience, much less the producers. Fortunately, things have changed. We're not revolutionizing anything but french spectators are more open-minded nowadays. It so happened that I was looking for a budget-limited project. I have no problem to write expensive movies but it's another story about the cheaper ones. So it was the meeting with Emmanuelle Escourrou, who already had a synopsis, and the producer Eric Porcher. It went well so we agreed to do it. We didn't want to remake BABY BLOOD but to approach its ideas in a new way. We started out writing a thriller and added horrific elements to it. The mob guys are as monstrous as those possessed by the monster and it's very straightforward. I cut out all the humorous elements.

But it's still gory ?

Of course! But we're not indulging in it. I like to make dark, serious movies. I'm a huge fan of David Fincher, for instance, and I wanted to do a some kind of SEVEN with a monster. There are lots of characters, emotions displayed... But no indulgence. Still, when it bleeds, it bleeds!

How did you work with Emmanuelle Escourrou to get to the final draft of the script?

You're shooting digitally. Why not on old-fashioned film?

It took me a while to accept the change. But with what's being done today digitally in postproduction, I defy anyone to point out the differences with what's shot on film. I made three shorts on film and postproduction for the last one was entirely digital. The master tape in HD is amazing! It also leaves me a lot of leeway, I don't have to count the takes, there's no producer looking over my shoulder and telling me to slow down on the rolls of film... You still have to be careful not to fall into the trap of shooting too much because you still have to edit the material afterwards. So I try to shoot digitally the way I do on film. With my camera operator, who's used to HD, we've gone for a very cinematic look.

Who did the special effects ?

They were done by David Scherer and his team. We started talking about the effects in May, six months before the first day of shooting, so in June, they were already sculpting and doing plaster casts. The original plan was to film everything even if it didn't make final cut so it had to be perfect. And David is an extraordinary guy - when he says a certain make-up will take twenty minutes, it doesn't take nineteen or twenty-one but exactly twenty ! There's no waste of time which is reassuring for all involved. The most important effect was the prosthetic Serge Riaboukine wears - he plays the mafia boss - and it only took the effects team forty minutes. It's very impressive!

Are there only old-school effects or also CGI?

We have a couple of CGI shots which were supervised by Sébastien Drouin. He's recently worked on Oliver Stone's ALEXANDER, on Matthieu Kassovitz's BABYLONE A.D. and Christopher Nolan's DARK NIGHT. And because of his work on LADY BLOOD, he couldn't do the Wachowski Brothers' SPEED RACER which I'm grateful for. He's so good that when he comes on set to do compositing shots with the actors, I leave the direction to him. I don't have a tenth of his experience and you definitely don't want to mess those things up.

Today is almost the last day of shooting. How do you feel about that ?

A lot of pride and I speak for everyone involved. I'm very proud of the whole crew, the rhythm was exhausting... It was like trying to fill a one galon bottle with three galons of water. But we did everything we had planned. I'm less tired than I thought I would be but I'm mostly happy with the result. It's gonna be one kick-ass movie! 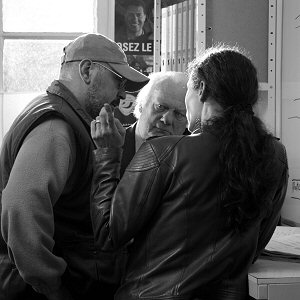 Why did you choose Philippe Nahon in your movie?

For the casting process, I called in all my friends: Bruno Solo, Philippe Nahon, Serge Riaboukine, Shirley Bousquet, Matthias Van Khache... If you ask them why they're in the movie, it's because I appreciated the talent I came across one day and I knew they would look their parts. And they look great! I wanted to preserve that B-movie spirit because it's kind of an old-fashioned thriller. There are several long scenes that aren't cut because the actors need room to express themselves. And we have that kind of B-movie talents in France!

What are you bringing to french genre cinema ?

I don't know if I'm really bringing anything new. But after seeing the dailies, something definitely happened with what we'd written in the script. So I'm hopeful about the reactions we'll get...

The movie's going into postproduction. Has a release date already been set ?

I'm bound by contract to deliver the finished movie between mid-March and mid-April. Then there's the Cannes film festival but it's not quite appropriate for that. Maury et Bustillo learned the lesson the hard way when they presented INSIDE last year. So the release date will be set by the producer and the distributor. I think it's a good movie to come out between seasons, like in the fall - it's one I would like to see on Halloween, for instance, on a night out with friends. But there's no point in going up against STAR WARS 12 or HARRY POTTER 40 so we'll see.

An increasing amount of movies anticipate their DVD release. Have you already thought about the supplements you would like to see ?

I sure have. There will be a long Making Of filmed by a crew that was with us almost every day so there will be a lot to discover. Shooting a movie is an adventure in itself and so many things happen. There will also be an audio commentary with several guests but I've also asked to do one exclusively with my screenwriter Hubert Chardot because this movie is the continuation of our previous work together. It's just the first stone to be laid and there will be others