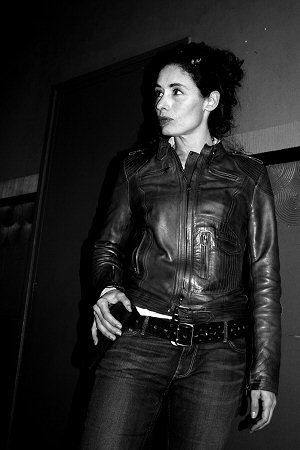 BABY BLOOD saw the light of day in 1989. Why did you wait until now to make a sequel ?

Why? Because the original movie came out on DVD three years ago and on that occasion, I was offered an interview. I thought it was a joke but it wasn't. And while recording the conversation, I was suddenly thinking that it would be fun to do a sequel, that I'd love to go back to the character of Yanka and see what she'd become seventeen years later. So I started writing down ideas.

So the new project originated with you?

Yes. To begin with, I wrote on my own. Then I met Eric Porcher from Alterego Productions who introduced me to screenwriter Hubert Chardot and director Jean-Marc Vincent. We got along just fine and proceeded to writing together which resulted in several versions of the script. Then Jean-Marc Vincent alone took care of directing.

What made you want to do a sequel to a movie as rough and bloody as BABY BLOOD ? It wasn't received very favourably upon its release...

It sure wasn't. I keep saying this but when it came out, people reacted as if I had made a porn movie. That kind of movie was totally unheard of in France but it was very tongue in cheek and had its funny moments. There was such an excess of blood and gore... Appearances by Alain Chabat and others were amusing. So why make a sequel ? First of all, I've always liked genre movies and the script for LADY BLOOD contains a lot more material than BABY BLOOD which was just a story about a pregnant woman who hears her unborn baby talking... There were less characters and locations whereas in the sequel, there are many protagonists, almost like "families". We have Yanka's real family, complete with husband, daughter and mother-in-law and then there's a professional family which is the police. Seventeen years later, Yanka is a chief of police who'll investigate horrible crimes that will remind her of her past... The mafia makes up the third family. So there are a lot more characters this time revolving around Yanka instead of just her and a monster. The monster manifests itself differently but I can't go into that. All these things put together made me want to delve deeper into this poor woman's life.

In BABY BLOOD, the talking monster was represented by a voice over. Is that still the case?

No, it's not and I think that's good because the voice over wasn't very effective... It will be something a lot scarier, a lot less humorous. There's still room for a few funny moments but the movie really goes for the horrific thriller type. It won't be gory either. There will be a few bloody scenes but the overall structure is a kind of thriller. 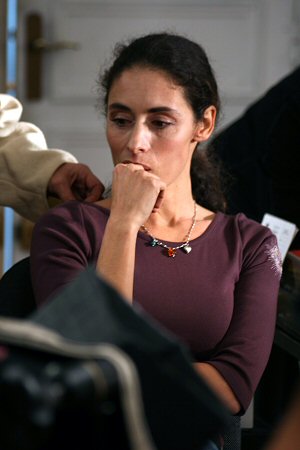 The end of shooting is near. How did it go?

It ends tomorrow, yes. It went very well but it was very "rock'n'roll" ! We only had thirty days of shooting so it was very intense for all involved. Since we were all on edge, I thought to myself that the next time, I'll write something a little lighter in tone. With a movie such as LADY BLOOD, a thirty days shoot can be harrowing. But in spite of being exhausted, I'm also very pleased. I'm glad it's almost over.
So, yes, it went well but was gruelling for all of us.

BABY BLOOD was a very gory movie. Can we expect the same level of bloody shenanigans or did you aim for an overall horrific atmosphere ?

Like I said earlier, this movie is not about excess. There are several gory scenes but they aren't filmed in the same way. They aren't funny but definitely scary. And since LADY BLOOD has several secondary stories, the gore is less important. The gore, It's just blood. The aficionados will probably miss it but will still have other things to revel in. There's a lot more suspense and better drawn characters. Yanka will see her fears resurface little by little in a suspenseful crescendo. I hope all that will be clear... So there will be emotions, horror and blood but treated very differently. These things have been evened out. We're no longer in a gore movie but a bloody thriller.

Earlier, we talked about the voice over in BABY BLOOD. What are your feelings about this movie today ?

Let's just say that the script we had was more of a pretext. We did have Alain Robak's very real vision, though, a real director's take on it which resulted in a beautiful story. Some images or scenes of BABY BLOOD I find sublime despite the lack of budget, just like LADY BLOOD. For instance, there's a scene where Yanka takes flight. I can still remember how that was done. It's the lack of budget that awakens the creative forces of everyone involved. There's no money but things still have to be done so scenes are created on a shoestring that people marvel over afterward. We just didn't have what an american production does. And what I like about BABY BLOOD is the fact that we never tried to go the american way, we made a real, french genre movie, one the first of its kind. And we did it well.

BABY BLOOD was directed by Alain Robak. Why not hire him to do the sequel?

Because he had other projects and didn't necessarily want to. When I had written the first draft, I talked to him about it and asked if he would eventually direct. It turned out he didn't but he gave me his full agreement. He was happy that I wanted to do a sequel to his movie. On another note, I think it's good to have a completely new take on the story seventeen years later. I find that very interesting.

What more can you tell our readers about the story?

Not much, unfortunately, since I want to preserve the secret... This story takes place in the south of France whereas the first one took place in the north. The sea had to be present again since it represents the monster's natural element. Yanka's character has evolved a lot. Seventeen years later, she's a mother and a chief of police. She's a fulfilled woman, in love with her husband and happy with her daughter and mother-in-law (?!). Everything's going great until a strange occurrence disturbs her new life. With the help of her psychiatrist husband, she tries to convince herself that it's just a nightmare. But it gets worse every day... In a secondary story, she heads an investigation into the local mob which leads her to the discovery of horrible crimes, so much like the bloody carnage she herself committed while under the monster's influence all those years earlier...