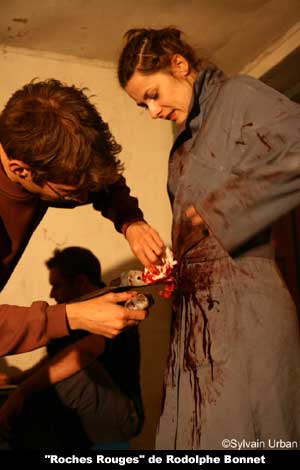 Before we talk about LADY BLOOD, how does a French guy decide one day to go into make-up and specializing in special effects ?

I've always been a huge genre movie fan but it was only after high school that I made up my mind. I just started out on my own, without training and it was only after trials and errors that I perfected my technique.

If we go back about ten years or so, it seemed hard to find a shoot where special effects make-up were necessary. It must have been discouraging and one would need an overwhelming passion for the work. How do you feel today about the years that have gone by and the ones in store for you ?

Obviously, passion is a must-have! But things have changed here in France concerning genre movies and more and more horror movies go into production. On my humble level, we've never had as much work as we do right now. It isn't rare that three or four of us work together on only one shoot as were the case with LADY BLOOD. The fact that horror and fantasy are becoming more accepted also counts for a lot, and special effects are being used for telling parts of the story and not just as a gimmick anymore. Creatively, we're being asked to do things that are a lot more extravagant instead of just the usual bullet hole or scar. So the future is definitely looking good.

In your filmography, we find a lot of short movies but also participations on full-length films that contain very different atmospheres. In this respect, you've worked with Jean Rollin and Lloyd Kaufman just to name those two. Technically speaking, it probably didn't change anything for you but is it still different working on a Rollin movie, a Troma project or for Jean-Marc Vincent ?

On Lloyd Kaufman's movie, I only did the design and a couple of zombies whose appearances are a little different in the final movie. It was done on purpose in a very Troma-like spirit. Technically speaking, our work doesn't really change but the director's vision definitely influences us. On Jean Rollin's movie, we did something along the spirit of the movie which means that it wasn't hyper-realistic (it was a child's cut-off head) but rather surrealist and dreamlike. Jean Rollin's universe is very poetic, he's an atypical director but it was very interesting to work with him. On 8TH WONDERLAND by Jean Mach and Nicolas Alberny, our work was on the contrary very realistic because it's a science fiction movie so there was no room for indulgence or grandguignol. On LADY BLOOD that we've just finished, the over-all tone went towards "painful" effects. Jean-Marc Vincent's directives were very precise. He wanted violence instead of gallons of blood.

You've worked on an astronomical number of short movies. Beyond your passion, did that help you make a name for yourself ?

I would rather say that it helped me get to meet a lot of directors working in totally different ways and with countless influences, people who use special effects differently that often produce amazing results. Romain Basset's BLOODY CURRENT EXCHANGE with its very Dario Argentoesque esthetics is very different from Pierre Guillaume's FUSIBLE, for instance, but they're still two very good short films within their respective creative universes. And that's what I primarily look for. This last summer, I worked on three projects that were very "Survivor"-like (ROCHES ROUGES, SURVIVOR, THE SALE) and each director approached his subject very differently. It was great to work on those projects and by the way, the first opinions about THE SALE are very positive as well as for SURVIVOR in which there's an impressive massacre sequence. I did an effect for ROCHES ROUGES which is definitely painful to watch but that's all I'll say for now.

How did you get the work for LADY BLOOD ?

In a very simple way, actually. I had just started working on a TV show when the production company got in touch with me. We talked about the special effects and then I met Jean-Marc Vincent, explained to him the way I wanted to proceed and then I did an estimation of the costs. A couple of days later, I got the green light and that's it.

From the photos we've seen, LADY BLOOD is not for the faint of heart. Fingers or jaws get ripped off among other things. Did the special effects gaves you any kind of problems or were they more of a challenge ?

There are a lot of complex and gory effects in the movie but we'd already talked a lot with Jean-Marc Vincent prior to shooting. His approach was very intellectual because he doesn't want gratuitous effects. In his opinion, they serve the story and the direction so we're definitely on the same wavelength. I don't want to reveal too much but my team and I created more than forty different effects. Like I said before, they're more painful than explicitly gory. There's a lot of make-up done on dead bodies, several wounds… This approach and the work done beforehand really helped us because we were on a limited budget and prep time (we basically had one month to get everything ready). We also had very little time on set where everything had to move pretty fast. But we had designed the prosthetics and the rest in order as to put them in place very fast and save time. On top of that, we worked simultaneously on a TV show which will give you an idea about our life for about six weeks.

Did you work alone or with a team for LADY BLOOD ?

In our work it's often a team work. Michel Pages, Leonie Pouyan Vautier, Sophie Chamoux (on the set), Severine Therasse (labo) and Olivier Nelli (mold assistance) was the team who worked with me for LADY BLOOD. 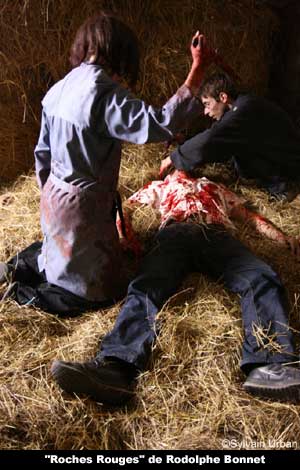 Today, special effects are often made with CGI. Jean-Marc Vincent told us that LADY BLOOD contains both kinds of make-up. Have you already worked with digital effects, on LADY BLOOD, maybe ?

I've worked with digital effects on Olivier Beguin's NAUFRAGE for a beheading. On LADY BLOOD, there are a couple of CGI shots but they're more "physical". CGI reinforces an already existing effect and makes it a little better. But 95% of the effects are composed of a prosthetic or an on-set make-up. LADY BLOOD has that homemade charm that I really love.

Some people don't like gory CGIs. How do you feel about those ?

I'm not a huge fan of 100% CGI effects. But combining both techniques - mixing the organic aspect of make-up with the more dynamic digitals - is the future! For instance, on the aforementioned NAUFRAGE, there's a long shot of a decapitation which combines old-school make-up and CGI.

You've probably already seen BABY BLOOD. So, what do you think about it ?

I really like the combination of the diverse elements: humor, gore, burlesque… I also like the fact that it was a forerunner for the genre in France, it really was the first gore movie attempt that made no apologies. Alain Robak created his own universe just as Jean-Marc Vincent has done with LADY BLOOD.

Looking back and replacing the movie in its context, how do you feel about Benoît Lestang's work on BABY BLOOD ? Do you still feel that its special effects hold up ?

I recall being very shocked back then ! It was the first time we saw so much gore in a French production. Everybody remembers a scene that's gotten cult status where two bloody hands emerge from Emmanuelle Escourrou's belly… Today, in all objectivity, I think the special effects work just as well as back then.

You've finished LADY BLOOD but probably have other plans already. Can you tell us more about them ?

Like I said previously, while working on LADY BLOOD, we also did a TV show. At the beginning of 2008, we'll do the next Sepultura music video. We also have several full-length movies on the burner but that's really all I can say right now except to add that it will be bloody…