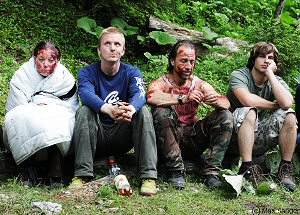 Eric Dinkian : Could you introduce yourself to our readers ?

Matthias Olof Eich : My name is Matthias Olof Eich, I'm the director of the backwoods slasher BREAK. I started in this business in 1999 as a Set and Propsbuilder. In this work I got the chance to build some of the Classic and Prequel STAR WARS props for LucasArts and LucasFilm for the european publicity work. Then I started shooting some music videos, commercials and short movies on my own. In 2005, I played a role in a Movie called THE BLACK REPTILE. That's when I meet some producers and they liked a script of mine and so I got the chance to make my first motion picture called DEEP HOLLOW. The fact that we didn´t got enough money to shoot DEEP HOLLOW the way I wanted it led us to the script of BREAK which was a lot cheaper than the other one. Well, and that's why we here now. 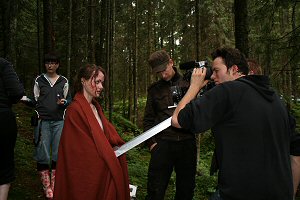 What were your major influences when making Break ? It reminded me of DELIVERANCE but also THE DESCENT cause of the feminine cast.

You named it. DELIVRANCE and THE DESCENT are two of my all time favorite movies and you can find a lot of similarities with BREAK. But my biggest influences were American "B-movies". I grew up with those films. My older brother and his friends always tried to shoot movies like those they watched in cinemas. And when they started there first short movies it was always gore and bloody. Really funny to watch that as a 9 year old boy.

How did you involve this mostly feminine cast in a project such as Break?

The idea to make the whole cast feminine was already part of the first draft of the screenplay. I really loved the idea of this cast. There is no "hero" type of guy for the audience. I hate flicks with those guy´s involved. We don´t have one, so I hope the viewers will have there fun in wondering who will face those hillbillies. 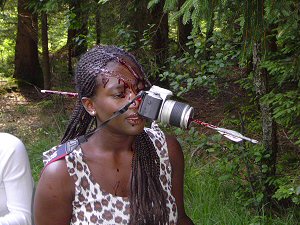 Is it difficult to produce a horror movie in Germany ? 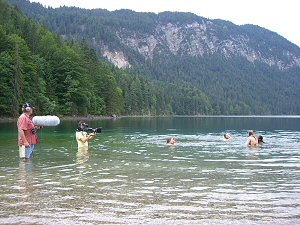 How long did the shooting and the post-production of BREAK last ?

We needed 21 days of principal shootings and 3 days for some pick up shoots. The whole post-production including all the Vfx, score and sound needed 6 months. But I have to say that the post productions was done in our "free time". Remember, BREAK is a independent movie and after those 3 weeks of shooting we all had to get back to our regular jobs. But I'm very proud of everyone included in the team. They all did a great work and I love to see them all back again.

BREAK is very gore but it's also a fun movie. And then comes the rape scene which is very disturbing. What was your goal with this sequence ?

Yeahhh the rape scene... I think that's why my "Wanted" picture is pinned on the wall of every office of the German censorship authorities (laughs). But it's easy to explain. I can't find one little funny thing in the raping of a woman.... so I wanted to show it as hard as possible. I already knew on set that this scene would be violent and very disturbing so I shoot some scenes to give me the chance to cut it out. Then, after the first screening of the rough cut, everyone of the audience told me to cut out the raping, because that was the worst they ever saw and they felled uncomfortable watching it. Well at last I decided to not cut it out but cut it down from 3 minutes to 1 minute. And man, it's still hard to watch. But my goal was reached. Even the hardest "Slasher-Fan" is getting nervous watching it. I think that's what everyone should take home from watching BREAK: chopping of a man´s Balls is funny... raping a woman isn´t. 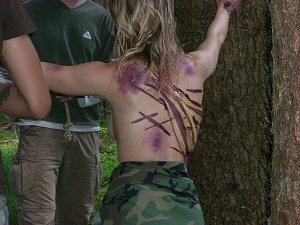 What feedback do you have after the latest screenings of BREAK, for an example at Sitges) ?

The best feedbacks I got was when everybody was amazed that the whole movie was shoot in Germany by Germans. When I started working on BREAK my greatest aim was to shoot a movie that looked international and not "German". So when people told me that they never thought that this was a German movie I was very happy with my work.

What is now the future of Break ?

BREAK will be released in most Country's on DVD this summer.

What are your projects now ?

Ohh... I can't tell you that... Because I had to kill you... and all your readers too (laughs)… Shooting independent is the same as shooting for Lucasfilm... TOP SECRET… OK ! Joking aside, we already started the next movie. I can't tell you to much about it because its a very simple storyline and I don't want to spoil the fun. But what I can tell you about this movie is that we will have a way bigger body count than we had in BREAK and a lot more firepower and funny moments. It's completely different to BREAK and we will go a new way.