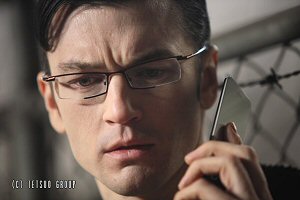 Your physical presence on screen is impressive. But your voice, the way you talk and scream is very unconventional. How did you work the "sound" of your character?

I considered how the throat, lungs, and apparatus of human speech would slowly and painfully turn to metal. When we did the voice recording later on I would also take on appropriate physical positions that would alter my speaking. But there is more to this on the technical side which is Tsukamoto's work. There was no sound whatsoever recorded on set, everything was down after the film was edited. We headed into the sound studio and every actor had to re-create what it was they spoke during the recording, something quite difficult I think as time has passed, and we are away from the scene we had made on that day. The after recording of sound was very tedious and took a long time to complete. Tsukamoto then worked with the sound engineer to make my voice increasingly metallic as transformation progresses. I heard that at times they had done things like play the sound into a metal bucket and re-record it from there, and had tempered with the sound in a number of analogue methods such as this.

Almost all of Tsukamoto's films have been done this way, with 100% voice recording and dubbing done after the film has been shot.

M. Tsukamoto is the director but also your acting partner. How was your relationship with him for this movie ?

If you look at the film and break it down scene by scene Anthony and Yatsu (me and Tsukamoto) are actually only together on camera in one scene. So my acting with him is very little. Anytime the camera cuts back to me Tsukamoto would have been on camera shooting. Most of the time he is there as director, but he also runs the camera, sets the lights, and even sculpted my masks. Point by point this film is hand made by Tsukamoto. If you have seen his movies and seen him act in other projects then I think you get a good sense of who he is. Sometimes he would be easily satisfied with one take, and other times we should shoot the same segment over and over again for hours. I was never able to determine what the difference was for him in his mind, but most often he is very selective of small details. I felt that I had a good idea of the direction he wanted to go, and so seeing that he left me with freedoms to create and alter my role as I desired.

The metamorphosis of Anthony is extreme. Was it difficult to play with all this make-up ?

I really like being able to transform into something completely different from myself. I have always admired actors who in each film, we hardly recognize them as they have become something completely different then as we know them. That being said, I looked forward to the various make-up appliances, but they were often very painful to wear. Tsukamoto wanted to constantly have a special effects person on set the entire 9 months of shooting, so he decided to use a girl who was fresh out of make-up school. She had some basic ideas of construction, but she did not have years of professional experience and testing to back up that knowledge. This resulted in masks which never fit quite right, and most often were too tight to the point that I felt like I had some kind of torture object from the days of the witch persecutions on my head. Over time she would learn from her mistakes and find better ways of making the masks. But the best thing I felt was to use this for my acting, Anthony was in pain, so if I was in pain then it would be only a natural experience. Hell, sometimes I even wondered if Tsukamoto created some kind of tortures on purpose to make the acting authentic. Ultimately these make-ups give me a physical connection to being Tetsuo, something that becomes an aid to the expression over using only the imagination.

Watching TETSUO: THE BULLET MAN is a visceral experience. Camerawork, editing and sound contribute a lot to the experience. As an actor on the set, did you have any idea of what the scenes would look like at their final stage ?

Tsukamoto had created a book of his concepts, with a collection of pictures and paintings that influenced him. He had made wonderful drawings of his concepts of what the characters and the various phases of the Tetsuo would look like. During filming, of course I would look at the play back of what we had shot. I had some rough idea of the visual he was after, and I tried to always stay close to his designs. With sounds I had no idea and I was always curious what the music would be like. In any case he re-edited the film a couple of times, and we have arrived at the final TETSUO: THE BULLET MAN now as you have seen it. Now that it is at its completion I see everything for what it is, and I think it is only Tsukamoto who could see that from before. Many pieces he discovered along the way with the organic development of the film.

The movie is full of incredible scenes. My favourite one is the crazy gunfight between you and the soldiers in the house. Have you got anecdotes about the shooting of this sequence ?

This scene took about 3.5 weeks to shoot. I was excited to do the wire stunt, where I jump down from the ceiling towards the soldiers.

Tsukamoto said he knew the scene would be shot in this narrow hallway, and the hallway at his home outside his bathroom was the same size. So when he was sitting on the toilet he imagined how he would shoot the scene. It was often tedious to get the timing perfect of my action, the combined effects like smoke and explosions, and camera action.

You see sparks fly off my body at times as I am hit with bullets. The first time we did this they brought over my usual suit jacket, and I saw about 30 wires running down from it. They were lightly taped in with small pieces of tape in a fragile manner. I put the jacket on and the huge clump of wires ran down my pants and out the leg, and then plugged directly into the wall. OK, as a child in America we were told electricity is very dangerous. A professional electrician friend told me most death from electricity happens to people in their houses who are playing around with their electric appliances. They told me they found something on the Internet that explained how to get the spark effect (but I am quite sure it was not intended for placement on the human body).

I told them, "You know I don't mind if I die while making Tetsuo, really it's OK. But you should think about continuity and who will finish the movie ?"

A few days later they prepared a rubber suit I would wear beneath the spark jacket.

Tomoro Taguchi makes an appearance in the movie. Did he give you some advice to play the new Tetsuo character ?

No unfortunately I did not meet him until much later after the film was finished. At that time we had an argument about whose shooting was more painful. Taguchi said it was him because Tsukamoto taped pieces of metal directly to his face to make the masks. But I said on my side, because we shot on digital, Tsukamoto shot for hours and hours on end because he was not limited by having only small amounts of film stock as he did in early Tetsuo days. Perhaps Taguchi's pains were more intense, but mine were stretched over longer periods of time. 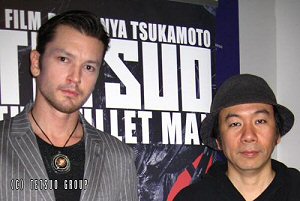 TETSUO: THE BULLET MAN has just been released in theatres in Japan. How was it received by the local audience ?

It has been great, people in Japan are very excited, and the film has been all over the media.

Though people sometimes complain the movie hurts their ears. This is because Tsukamoto turns up the volume to the max on the theatres, it's played much louder than the average movie. Actually in New York when we showed the film at Tribeca Film Festival we blew out the speakers on our North American premiere. If you watch this on DVD later, be sure to turn it up loud and watch it as it was meant to be seen.

What are your projects now ?

I have been very lucky to have taken a path that no one has walked before, and I wish to continue in that way. I am working towards building my acting career internationally; I would like to appear in films in the US, Europe, and other parts of Asia. With my photography I have just begun a new series for exhibition in Nîmes, France 2011.