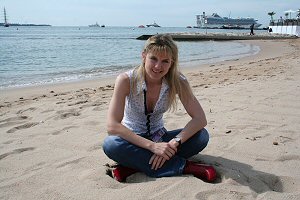 Eric Dinkian: Before we speak about BREAK, could you introduce yourself to our readers ?

Marina Anna Eich : My name is Marina Anna Eich, I'm a German actress. I ventured into producing films and I am also a distributor which means I'm also in Cannes to look for interesting films, independent films, to buy rights for German release in theatres and in DVD. We also have a DVD label. So I'm pretty much of everything.

How long have you been acting ?

I started when I was 16 as a part time job and at school, so I could finance my studies with little parts in cinema and TV series. I've always liked art. Then in the year 2000 I became also a producer with the company WTP International. I was still acting, for example I played Eva Braun in a documentary drama movie for the Japanese television called HITLER, then many other German TV series. So I have been acting for a pretty long time now. I don't like only to act, I also like to see the things behind, so I like organizing, producing, to see how it is to make a film, I also like to tell things through films.

And you have not directed yet ?

No, I think it's the only thing I'm not doing. (Laugh)

Do you like horror movies, do you know this genre? How did you come to a project like BREAK which is a bit harsh?

As a producer and as a distributor, I'm more focused on artist films, thought-provoking and deeper sets, but for my hobby I really like good horror films. I have a very huge DVD collection of horror films ! And I've always said I really would like to make a horror film someday. However I know that we -as a production company- we're not doing it because that's not our way of doing films. So that was a very lucky coincidence that my cousin Matthias Olof Eich called me up and said "Marina you've been since years in the film industry, I have a role for you. Can I send you my script ?". I said "You know what, I have no idea if I have the time but OK send me the script and I'll tell you." So I read the script, then I said "Ok, I really like the fact that you're going to produce it on your own, without funding system because we're working the same way so I will give you all my help, camera, dolly…. Whatever you need technically you can have, and I can really free up some time to play this role because I would like to help you". That's how I came to play this role, out of help and also out of interest because I like horror genre.

You told us about producing disturbing art films. From your point of view, do you think BREAK is disturbing ?

For me it's not disturbing, no. It's entertaining in a way and it's very new as a German genre because Germany is not producing so much horror films. So this is kind of a unique thing which I really like but, why is it disturbing for you? 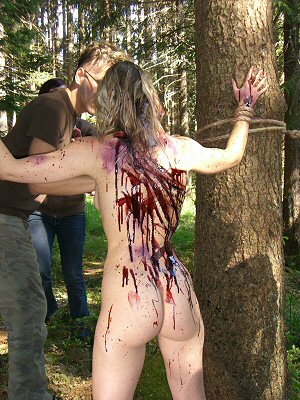 Because you're French! (General laugh)

Maybe… In the audience everyone was laughing, reacting very cool in front of the movie and when the rape scene comes no one breathed a word…

Yes, I think this scene makes a twist in the movie. A twist because the scene is touching you, it also touched me because it's really very brutal, very honestly brutal.

How was it to shoot this sequence ?

It was very good because I had a very good relation with my acting partner. We set together, we said "Ok how far you would like to go?". Then I told what he can do, what he cannot do. He told me what he likes to do, if this is possible, so we made it up in our head and then it was no problem because as an actress if you have restrictions, it's not good. So I always say as an actress you're playing a role, that's not you, it's a role. And if you have any restrictions to play a role it will not be good to do it that way. For example someone says "Why are you not ashamed to present yourself naked like this", I say "Why? Naked is such a natural thing", not raping but being naked is natural. Things like this happen really so why shouldn't you do this as an actress ? For me it's good to make some specific and also some cruel scenes, as an actress it's very interesting. 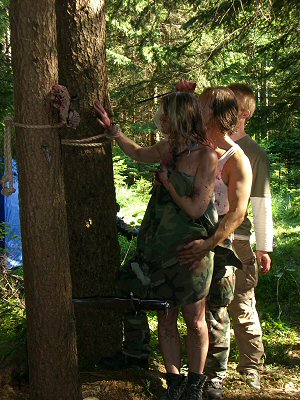 One thing caught us: it's the relation between the 4 characters, the 4 girls, which was very good. So ok, it's a genre film but the 4 characters work very well together I think.

You said it's a tiny budget but the production value seems a lot bigger ?

Yes, that's right. I think the camerawork is a very good work and also Mathias -as a director- had good ideas about how the camera should look and also the post-production was very good. I think they spent a lot of money through the post production. That why the result is much more than the real cost.

The movie was screened in Sitges. How did the audience react ?

Very good because the Sitges audience is marvellous and they're so yearning to see genre films, also artist films, and sure, science fiction and horror films. And it was packed, it was full, 400 people or something, it was a very very good response. 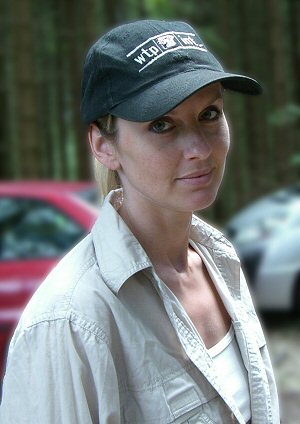 And now, what is the next step for BREAK ? What do you expect ?

World companies is going to sell it in many different countries because horror films are still a very good market value.

Could you tell us about the film you produced ANGEL WITH DIRTY WINGS which is not related to horror or scifi ?

ANGEL WITH DIRTY WINGS is an erotic drama, very provocative, about double moral, about sexuality, about freeing oneself from the moral of society. So just be yourself, don't follow the line of what others tell you, you should do this, you shouldn't do that. So this is a film to free yourself from double moral, to search your own sexuality. We have a market screening here and it has been titled "the scandal film in 2010 for Germany", so we have about over 500 press articles and many festival screenings. It was screened in Sitges. It has also been screened in India, even though it's a rated X 18 film because of the sexual content and because of the way it is done. But I'm very much behind that. It's completely different from BREAK but that's what, also as an actress, is great to do many different things.