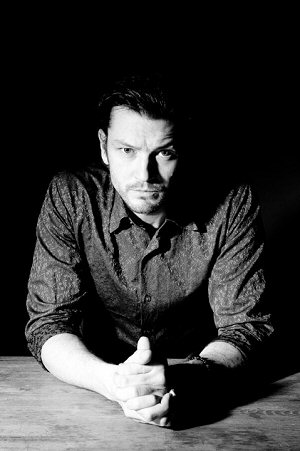 Eric Dinkian : You seem to have many, many skills ? Could you introduce yourself to our French readers ?

Eric Bossick : Eric Bossick, born in Pennsylvania, USA. I lived there only a couple of years before I moved on to grow up in Singapore and Canada. I started acting in my teen years, I graduated from university in Canada taking a Bachelor of Fine Arts in Acting. I began to travel, and landed in Tokyo. Once there I was working as a model and took up the study of Ankoku Butoh dance. I studied with many teachers, performed with groups and moved into solo performance. I later took up photography myself, and after a couple of years began working professionally shooting portraits of musicians, actors, and dancers. From that point on I freelanced in both acting and photography. My photography was exhibited in Nîmes, France, March 2009, with the event L'Expérience Japonaise. Ever since I ate the wonderful food and drink in France I could never feel satisfied in another country's restaurant.

How have you been involved in the leading role of TETSUO: THE BULLET MAN ?

Tsukamoto Shinya is a good friend of Gaspar Noe. Gaspar was shooting in Tokyo, and my manager had done some work on Gaspar Noe's film. At the wrap party Tsukamoto met my manager. A few months later Tsukamoto began casting TETSUO : THE BULLET MAN, and he called for a submission of actors. From my office four people went, but in total Tsukamoto auditioned over 100 people for the role of the new Tetsuo. I had a call from the manager, and he said "Hey some guy named Tsukamoto Shinya wants to make an independent movie, are you interested in this ?" I was shocked by the sudden phone call, I was a big fan of Tsukamoto, and my manager didn't even know who he was. An audition time was made, and I requested pages from the script to practice before I would go. What I received simply said `THE BULLET MAN`, and in those scenes was some talk about cyborgs. Tsukamoto had made films in the past dealing with the themes of cyborgs, humans and metal, so I thought it was natural he would make another film of this subject matter.

Looking at the scenes I received, I had the idea this role must be an important part of the film, but I never thought it was the lead role of the film. I had assumed the main part of the film would be taken by a major Japanese actor, such as in his last handful of films. But I knew this was a great chance, and I really wanted to take part in a Tsukamoto Shinya new work. So I prepared heavily for the first audition, about 3-4 hours a day for 2 weeks before. The script said the character was half Japanese, and I worried as I am Caucasian that it would be a negative point towards me. So I colored my hair black, shortened my eyebrows, and adjusted my complexion. My audition came on the day of the spring equinox in 2008, I walked in and introduced myself. Everyone was very polite, and seemed nervous. I had already worked out how I wanted to perform the scenes so I presented what I had built on the script. It was, incredibly surreal to be acting in front of Tsukamoto Shinya, and to have his intense stare on me. While he was very polite, I had in my mind, a flash of his performance from NIGHTMARE DETECTIVE, where as Zero near the end of the film with a knife he screams and cuts away at the hero, blood sprays everywhere.

I waited anxiously to hear back, it was maybe a month later I went in for a second audition, and it was down to 5 people. I found out the other 4 were all half Japanese actors. So I decided I would go in and blow them out with intense acting. At the second audition Tsukamoto told me this was Tetsuo, and I was auditioning for the Tetsuo role. Then I understood how huge this was, it was something much bigger then I had imagined, it was a Godzilla sized monster who would destroy cities and minds around the world.

You're a Tsukamoto fan since the beginning. How was it to be the new incarnation/characterization of the cult TETSUO concept?

I feel as if I won the lottery, that there are insurmountable odds for this happening and yet it did. I never knew he was planning another Tetsuo, nor did I ever think he'd have an interest to work with a foreign actor.

For me I consider it a great honor. TETSUO is an icon of Japanese cinema, an important inherent moment of cinematic history. From the beginning I saw this not as making a film, but as partaking in the making history, TETSUO will live on forever. I've been involved in one way or another with the art scene in Tokyo, to have risen to this esteemed position is a great honor. 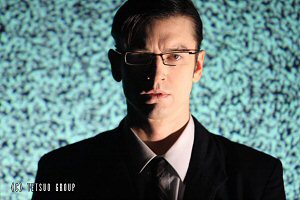 You're the first occidental actor to work with M. Tsukamoto. Was it difficult to mix with the Japanese crew ?

I have lived in Japan about 10 years, I speak Japanese, and I am quite accustomed to the protocol of Japanese society, the formalities of communication and etiquette. However it doesn't mean I always agree with or follow these forms.

The role of Anthony is paradoxical: very cold but very intense at the same time. How did you prepare your performance ?

The original TETSUO film has a very theatrical feel to it, the acting performances are large and seem more like a stylized kabuki performance than cinematic acting. In Tsukamoto's more recent films like NIGHTMARE DETECTIVE and VITAL you find performances that are much more subtle and quiet in nature. When I initially met with Tsukamoto my first question to him was which way was THE BULLET MAN stylistically meant to go?

He said he had never intended for the original TETSUO to be this way, but during the making of the first TETSUO when they shot on film, the amount of film stock was limited. They had only enough for one take per shot. He would roll camera and Taguchi would jump around like crazy, at which point Tsukamoto would be reside to himself, "Ah-well I guess that's it." Tsukamoto then requested I pursue a very natural and quiet style of acting.

For me preparation is key to how I work. I made an extensive history for the character and of his relationships to other characters in the story. I wanted to make my performance as real and honest as I could, so I then searched for emotional parallels to what Anthony was experiencing. Anthony has his child murdered, his wife bends into hysteria, and he finds the nature of his reality deteriorating piece by piece. I searched my mind and heart for times in my life that came close to this, and each moment of explicit pain I melted into Anthony scene by scene.

Physically I have spent 4 years in Ankoku Butoh, an avant-garde dance form, which focuses on grotesque transformations of the dancer, blending the body with forces in nature. I carefully considered the internal and external affects that would happen as flesh mutated into iron, and created a series of images, feelings, and movements that would express this metamorphosis.